The Department of Veterans Affairs (VHA) is committed to providing quality care to all Veterans including lesbian, gay, bisexual and transgender (LGBT) Veterans. Excellent care has no boundaries.

Aleda E. Lutz VA Medical Center, Saginaw, Michigan seeks to promote the health, welfare, and dignity of LGBT Veterans and their families. We are committed to making sensitive and high quality health care accessible. Our policies and practices focus on ensuring a safe, welcoming, and affirmative environment of care for LGBT Veterans. Our employees receive training in clinically competent care that is responsive to the unique needs of LGBT Veterans.

The discharge characterization for Veterans discharged under “Don’t Ask, Don’t Tell” (DADT) or previous policy should accurately reflect the character of their service. This is not always the case.

Service members who were discharged under DADT generally received an Honorable or General Under Honorable Conditions discharge based on their service records. However, a service member discharged for a “Homosexual Act” that involved a so-called “aggravating factor” might have been given an Other Than Honorable (OTH) discharge characterization. Most of the factors on the list (such as acts involving minors, prostitutes or coercion) constituted unacceptable behavior and should have resulted in an OTH. But there were two “aggravating factors” that did not inherently constitute misconduct and that should not necessarily have resulted in OTH discharges. These were acts committed openly in public view (e.g., holding hands at a restaurant) and acts committed on base or on post (e.g., a quick hug while being dropped off).

In addition, the Navy and Marine Corps gave those discharged for “marriage” or “attempted marriage” an OTH, while in the Army and the Air Force, members discharged for same conduct received Honorable or General Under Honorable Conditions discharges, based on their service record.

All branches of the military consider Veteran to have a strong case for a discharge upgrade if they can show their discharge was connected to sexual orientation, or mental health conditions, including posttraumatic stress disorder (PTSD); traumatic brain injury (TBI); or sexual assault or harassment during military service.

A Note About Discharges Based on Gender Identity

Despite transgender veterans being on the front lines of the fight to end DADT, transgender service members did not benefit from the DADT repeal. Even though the policy prohibiting transgender service was officially lifted on June 30, 2016, subsequent changes in 2017 and now-pending litigation have reinstated and then suspended ban implementation. A new implementation plan from the Secretary of Defense is expected to be released February 21, 2018. There remains considerable uncertainty about how discharges of Veterans based on gender identity may be handled in the future. For now, Veterans who were administratively discharged due to gender identity may also seek to have the categorization of their discharges upgraded as appropriate.

Several non-VA organizations may also be able to help you challenge your discharge characterization, change your narrative reason for discharge, or upgrade your re-entry code.

OutServe-SLDN* represents the US LGBT military community worldwide. Their mission is to: educate the community, provide legal services, advocate for authentic transgender service, provide developmental opportunities, support members and local chapters, communicate effectively, and work towards equality for all.

American Veterans for Equal Rights (AVER)* is the nation’s only LGBT Veteran Service Organization (VSO) recognized by the Veterans Administration. AVER provides advice, support, and referrals to LGBT Veterans regarding their rights and benefits, and helps Veterans procure the documents they need to access VA services. Many LGBT Veterans received less-than-honorable discharges because of their sexual orientation or gender identity, both under DADT and prior policies, and are unjustly denied access to their VA benefits.  Such discharges can now be upgraded, but the process can be complex, slow, and cumbersome.  AVER works to help LGBT vets with less-than-honorable discharges get access to legal assistance to help them navigate this process, and is dedicated to streamlining the discharge upgrade process so Veterans can access healthcare and other vital services from the VA.

As of March 2016, each VA facility has a local LGBT Veteran Care Coordinator (VCC) who is appointed by their facility leadership. The VCC is responsible for promoting best practices for serving LGBT Veterans and connecting LGBT Veterans to services. 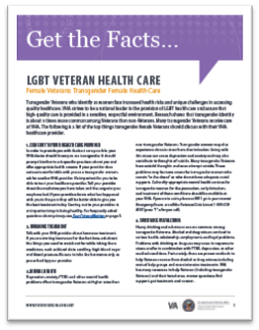 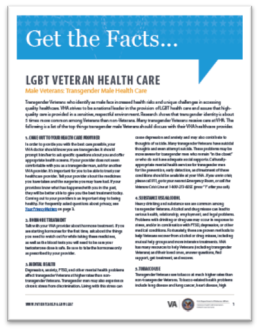 For more information about the LGBT Health Program, email: VALGBTProgram@va.gov.

Get help from Veterans Crisis Line

If you are in crisis or having thoughts of suicide, visit VeteransCrisisLine.net for more resources.